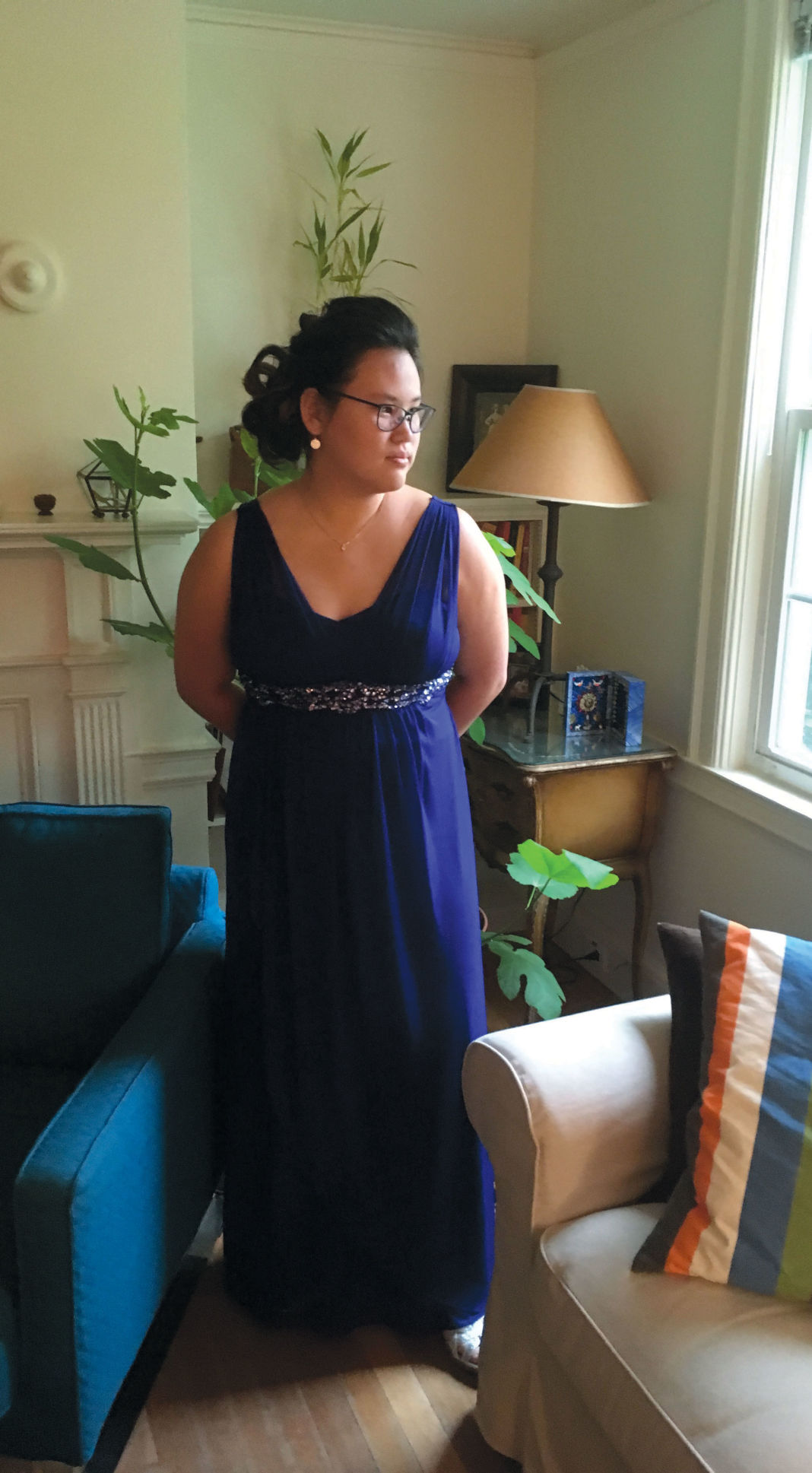 Rosemarie Webster is a seriously busy student; one could even say doubly so.  A freshman at Keene State College, she is pursuing a double major in music and English.

Choosing a major is challenging enough for any student but going for two requires a lot of heavy lifting: more core courses, fewer electives, a lot of energy, determination, commitment and work — all while remaining equally devoted to and interested in both subjects and their demands.

Rosemarie comes to Keene from Hanover High School. Her mother is the director of the Hopkins Center for the Arts at Dartmouth College, and her father, a former actor, created Dartmouth’s Opera Lab, where he is also a director, producer and writer.

Why then, with her proximity and connections to Dartmouth, did Rosemarie opt to enroll at Keene State College?

“It’s like a secret conservatory,” she said. Conservatories specialize, placing greater importance on training world-class performers than do most liberal arts colleges.

“Plus,” she said, “I was very impressed with (KSC’s president) Dr. (Melinda) Treadwell. You can talk to her; she is very accessible. The principal at Hanover High was the same way.”

The event that cemented her decision to join KSC occurred after the college’s long-time orchestra leader Don Baldini retired and the search for his replacement began. Rosemarie, who had been admitted but was not yet enrolled, was invited to be part of the review board charged with hiring the new orchestra leader.

She was extremely impressed with the process and the willingness the board had in taking student opinion into account when making its final decision. The new orchestra leader is Dr. Nadège Foofat, whom Rosemarie credits with her returning to the viola after a six-year absence from the instrument.

Rosemarie, who plays the violin and viola — skills she has been honing since she was five years old — also felt that the students at KSC were very serious about being music professionals. She considered the KSC professors to be uncommonly devoted to pushing students, challenging them, making them live up to their own goals and expectations — and beyond.

Additionally, she liked the atmosphere on campus, finding it friendly and safe.

When asked who her musical inspirations are, Rosemarie cites violinist Gil Shaham without skipping a beat, “He was my idol when I was growing up. He is very expressive and is a perfectionist, but not at all an egotist; he’s very humble and grateful. Oh, and Itzhak Perlman because, well, he’s Itzhak Perlman!” she laughed.

Her own personal process for learning and understanding a piece of music is to initially play it cold without regard to inaccuracies and then go online to watch videos of other musicians’ interpretations.  Then she’ll go back and play it slowly, with the aid of a metronome.

“Conquering the 16ths section is the most difficult area,” she said. She also cautions that, while it’s very important to establish one’s drive, students must also exercise a certain level of prudence and not overdo it. “Know your limits!” she urges.

Her future ambitions go a long way to explain why Rosemarie chose to double major in music and English: She hopes to become a travel writer and explore the countries and cultures she visits through the prism of their music.

Rosemarie Webster, violinist, violist, writer, Keene State College student, offers this final thought: “I know I can achieve.” With that surety, that powerful confidence, who could possibly doubt it?

Join us for An Afternoon of Song today, October 6 @ 3:00pm in the Alumni Recital Hall at the Redfern Arts Center.

This program includes sensual courtly songs of the French Baroque for voice and theorbo (a stringed Baroque instrument), lush and dramatic songs by German composer Richard Strauss, thoughtful and intimate pieces by American composers Aaron Copland and David Earnest, and cheeky and unusual songs by New Zealand composer Anthony Ritchie. In addition, the Voice Faculty will combine to perform Mozart’s stunning motet Ave verum corpus. The program will conclude with some famous jazz standards for voice and piano. Performers include:

An additional treat is that the artwork of Pamela Stevens will be displayed in the lobby of the Redfern Arts Center.

Tickets are available at the Box Office and this event is free for students.

We hope you can attend our concert on Wednesday, 10/9/19 at the UCC in Keene. Dr. Joseph Darby will provide a pre-concert lecture at 7pm followed by a 7:30pm performance. ... See MoreSee Less

Join us for an international choral collaboration on Wednesday, October 9th at 7pm at the United Church of Christ in Keene. 135 performers from the partner cities of Keene & Einbeck, Germany will present the Schubert "Mass in G" and other outstanding choral works. The concert will feature KANTOREI and the Beck String Girls Trio, and choirs from Keene HS, KSC, and UCC. This will be an amazing town & gown event that is not to be missed! www.keene.edu/news/events/detail/11139/ ... See MoreSee Less