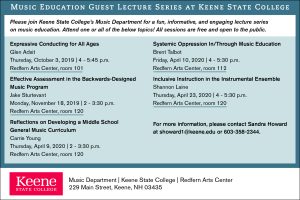 The National Association for Music Education was founded in 1907 and was originally named the Music Supervisors’ National Conference.  NAfME is the national organization for music education with over 80,000 members and it is “the only association that addresses all aspects of music education.”

Keene State’s NAfME student chapter is active in both educational and social events in the Music Department and frequently sponsors workshops, concert trips, conferences, and other events. Past events have included attendance at national conferences, coordination of the Music Department welcome picnic, trips to the Boston Symphony Orchestra, organization of the annual Department Banquet, and sponsoring of clinics and performances by guest artists and clinicians both in collaboration with the Music Education Guest Lecture Series at KSC and as a Chapter.

ACDA was founded in 1959.  It is a non-profit music-education organization that is dedicated to the advancement of choral music.  The mission of ACDA is to inspire excellence in choral music through education, performance, composition, and advocacy.

The ACDA student chapter at KSC has sponsored guest lectures targeted toward Choral Music Education majors as part of the Music Education Guest Lecture Series, it has sent members to Eastern Divisional and National Conferences, and it hosts the New England Area Collegiate Conference bi-annually, alternating years with the student chapter of ACDA at Plymouth State University.

In 1876, Theodore Presser and 62 of his colleagues founded the Music Teachers National Association with the purpose of advancing the value of music study and music-making to society while supporting the careers and professionalism of teachers of music.  Today, MTNA has cemented its role as an organization essential not only to the professional and individual well-being of music-teaching professionals, but also as a vital partner in their growth and development.  It provides both a collective voice for teachers worldwide and a powerful alliance with a highly prestigious and influential group (mtna.org).

The Keene State College Collegiate Chapter of the Music Teachers National Association (MTNA) is focused on the following goals:

Join us for An Afternoon of Song today, October 6 @ 3:00pm in the Alumni Recital Hall at the Redfern Arts Center.

This program includes sensual courtly songs of the French Baroque for voice and theorbo (a stringed Baroque instrument), lush and dramatic songs by German composer Richard Strauss, thoughtful and intimate pieces by American composers Aaron Copland and David Earnest, and cheeky and unusual songs by New Zealand composer Anthony Ritchie. In addition, the Voice Faculty will combine to perform Mozart’s stunning motet Ave verum corpus. The program will conclude with some famous jazz standards for voice and piano. Performers include:

An additional treat is that the artwork of Pamela Stevens will be displayed in the lobby of the Redfern Arts Center.

Tickets are available at the Box Office and this event is free for students.

We hope you can attend our concert on Wednesday, 10/9/19 at the UCC in Keene. Dr. Joseph Darby will provide a pre-concert lecture at 7pm followed by a 7:30pm performance. ... See MoreSee Less

Join us for an international choral collaboration on Wednesday, October 9th at 7pm at the United Church of Christ in Keene. 135 performers from the partner cities of Keene & Einbeck, Germany will present the Schubert "Mass in G" and other outstanding choral works. The concert will feature KANTOREI and the Beck String Girls Trio, and choirs from Keene HS, KSC, and UCC. This will be an amazing town & gown event that is not to be missed! www.keene.edu/news/events/detail/11139/ ... See MoreSee Less