Keene State College has participated in the National Study of Learning, Voting, and Engagement (NSLVE), housed at the Jonathan M. Tisch College of Citizenship and Public Service, Tufts University since 2013.  Since NSVLE’s launch in 2013, more than 1,000 colleges and universities have signed up to receive their voting rates for federal elections. Voter registration and voting rates in reports reflect Keene State’s students who were eligible to vote and who voted in elections. The results are based on Keene State’s enrollment records and publicly available voting files collected by Catalist.

As these charts show, that although enrollment at Keene State dipped by 27% between 2014 and 2028, 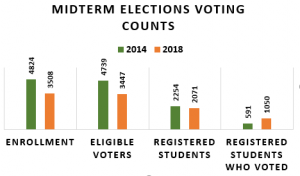 the rate of students who voted increased by 12.5%. Between 2014 and 2018, Keene State partnered with the Keene City Clerk’s Office to provide voter information and onsite registration.  The College also began to offer transportation to the off-campus polling stations and created a celebratory atmosphere for election days. Keene State student consistently vote mainly in person and voting rates increase slightly through their years in college. 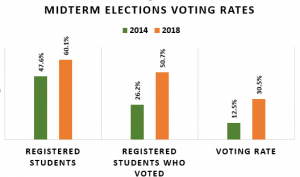 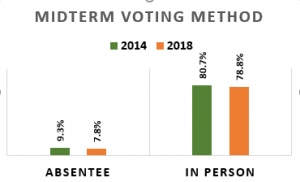 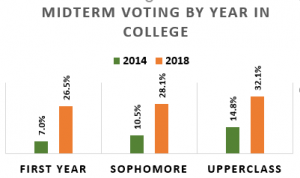 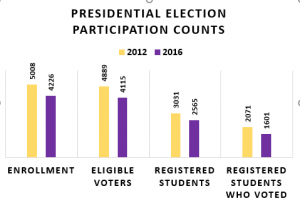 Keene State students are much more engaged in Presidential Elections than Midterm Elections.  This may reflect student demographics, where traditionally more than 50% of the student body comes from out of the state of New Hampshire. Enrollment at Keene State dipped 15.6% between 2012 and 2016 and the voting rate fell by 3.8%.  While national polling rates decreased between 2012 and 2016, institutions involved in the NSVLE study saw an average increase of 3.5%.  Keene State’s difference from this average increased from 4.5% to 11.7% below the national numbers.  Two significant changes may have impacted this change. First, the polling station where all on campus students voted moved from a block away from campus at an elementary school to the police station about a mile away from campus making it more challenging for on campus students to vote. Second, several large scale off-campus student housing facilities were constructed to the north of campus.  Residents of these facilities vote at a polling station several miles from campus. 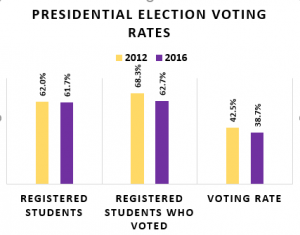 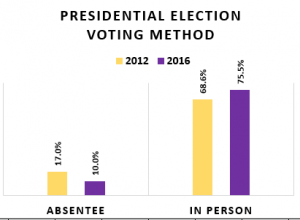 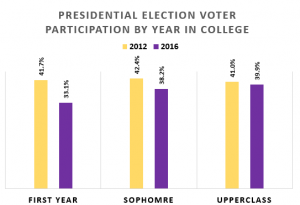