Below are just some of the ADP related events that Keene State College has been involved with, ranging from attending and presenting at national conferences to hosting renowned guest speakers. 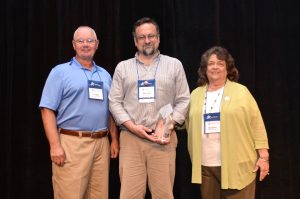 Students and faculty went to the ADP Conference in New Orleans to discuss economic inequality, the relationship between income and health, and other issues. At the conference, economics professor Patrick Dolenc received the Barbara Burch Award for Faculty Leadership in Civic Engagement for his work with ADP. In addition, Rudy Fedrizzi, Patrick Dolence and Kim Schmidle-Gagne of the college presented during the program. 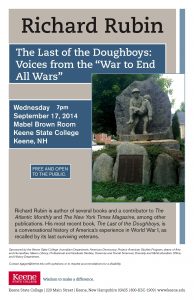 Author Richard Rubin came to the college to talk about his book The Last of the Doughboys: Voices from the “War to End All Wars” which details a conversational history of World War I from the perspective of the very last surviving American veterans, interviewed around the year 2003. Click here to learn more, view his website or purchase his books.

This trip included a Public Health Summit and an analysis of the Global Challenges curriculum – overall a good setting to exchange ideas and learn about being a global citizen.

Professors J. Wesley Martin, Patrick Dolenc, and Dean of Professional and Graduate Studies Melinda Treadwell of Keene State College presented at the American Association of State Colleges and Universities (AASCU) ADP National Meeting. Their presentation titled “Civics is Not Enough: Lessons from teachers for teachers” discussed how students believe in representative democracy yet have little factual knowledge about it. To fix this, they analyzed what they considered the root of the problem and then outlined a plan of action that would increase analytical thought, civic engagement and democratic knowledge.